Not your average girl group. On Dec. 9, 2015, I interviewed the talented R&B/ Pop music group N’LYSS. Their group name comes from the word endless and represents (Never Let Your Success Stop). Founded in Atlanta, the group includes three humble young women named Syd, Ari, and Tay. They have appeared on multiple talk shows and magazine covers. Their EP, “Truth Be Told” includes seven songs titled “Rite Now,” “Nobody But You,” “Don’t Worry About Me,” “Like What You See,” “Same O’L,”  “9 Until,” & “Kiss No Tell.”

The group has accomplished a lot and continues to inspire young women everywhere. In 2015, they won the GA Music Award for Best R&B group. N’LYSS has also won awards such as the RLM (Rebel Life Media) Award and WMVA (World Music Video Award) for Best New Artist Video. Interviewing these three young ladies was exciting because I haven’t seen a popular female R&B group since the early 2000s. Each of their songs has a deep and positive message behind them.

They just released their music video for their song “Nobody But You” off their new EP to bring awareness to domestic violence. I asked the girls how they came up with the concept for “Nobody But You.” Syd stated, “Well that song came about when we were all in our feelings one day and as we listened to the song it tells a message more than what we were thinking so we took it to the next level.” The trio also have some amazing producers who help produce their records. Some of their producers include Juice, T, Ozzie, & Poston.

Their impeccable work ethic shines through their success. One of their hit singles “Kiss No Tell” reached to 300,000 views on YouTube and helped them win the GA Music Award. When asked how they felt winning the award they stated, “At first we thought we weren’t going to win. We were so scared. But when we actually won, it felt special.”

N’LYSS has multiple inspirations including the legendary R&B artist Aaliyah. Tay stated, “We all love Aaliyah because she had the girly and tomboy swag and her songs also sent a good message. But we also love Beyoncé, Nicki Minaj, and Ciara.”

The girls are always busy and on the go. When it comes to balancing school, extracurricular activities, and being artists, they stated that they have school throughout the week and practice Thursday. So most days Ari does her homework and attend practice. Syd is in school and is a part of the cheerleading team. So her hands are full when it comes to being an entertainer, in school and a cheerleader. She states, “It’s kind of hard and I do get tired. Tay says, “Its draining [laughs] trying to balance all three but you have to balance it out.” She also mentions that this is her hardest year but believes if she stays on top of everything it will work out in the end.

As we all know, most music groups have tiffs and drama. The trio solves their problems with time. Syd states, “It takes time to heal cuts.” So if there is an issue, the girls handle it by letting time heal all wounds.

During the interview, N’LYSS stated that they would like to work with major artists such as Nicki Minaj and Drake. The trio would love to collaborate with many artists in the industry. Being an all-female R&B group comes with a lot of responsibilities. N’LYSS strives to give young women positive messages. They want young girls in their age bracket never to let their success stop. Ari states, “If you have a dream, strive for it and never give up. You can be whatever you want to be and do whatever you want to do.”

Fans can check out their new music video and song “Nobody But You” on YouTube and look forward to new music by following their Instagram page at Official_NLYSS and checking out their website. I wish these talented young ladies nothing but the best in all that they do. 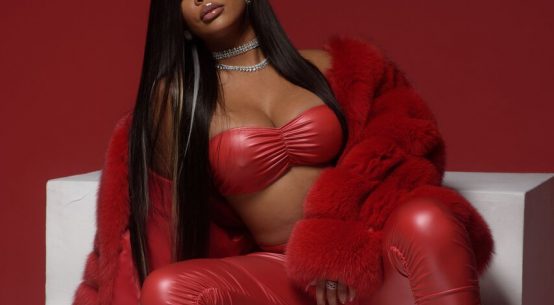