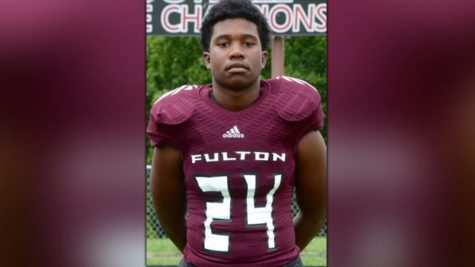 I wrote about Zaevion Dobson a while back. He was a young man that shielded three young ladies from gunfire. Dobson died while protecting the three young women. I called Zaevion an African-American Hero and at the ESPY (Excellence in Sports Performance Yearly) Awards, he was acknowledged for his courageous deed.
Check out the story that I wrote on Zaevion when word of his brave act that led to his death made national headlines.

Zaevion Dobson is the true definition of what it means to sacrifice your life. The 15-year-old jumped on top of three young women to shield them from gun bullets. According to CNN.com, shots were fired by gang members. Zaevion was a football player and a mentor to his peers. His coach, Rob Black said that he was liked by teachers and students at Fulton High School.

Zaevion’s brother Zach held him in his arms just moments before he took his last breath. The three young women are safe. One of the gang member’s Brandon Perry who was involved in the shooting was killed later that day. The shooting started when someone fired into Brandon’s home, so he retaliated but lost his life in the end as well.

President Obama spoke on his behalf and called Zaevion a hero. He dreamed of becoming a football player in the NFL or a coach. The other two men suspected to be involved in his death was identified to be George M. Rashaad and Kipling D. Colbert Jr. Sources say that his funeral will be held the day after Christmas.

I shed tears as I write this story. A young black man gave his life for three women. The amount of courage it must have taken to protect them. Sadly, gang violence was his cause of death. How many more? A mother sonless, a brother brotherless and now Zaevion is lifeless. Due to his bravery, his life will forever be celebrated by those who loved him the most. Truly a hero but we must stop black on black violence. 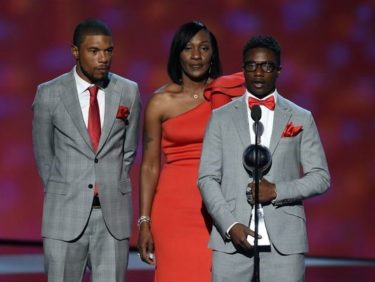 Now, it was proven at the ESPY Awards that his death did not go in vain. He was honored with the Arthur Ashe Courage Award during the show. Zaevion’s mother Zenobia Dobson accepted the award on his behalf. Zenobia Dobson was accompanied on stage by her two sons who each spoke about Zaevion and gun violence. In her speech, Zenobia stated that the country as a whole needs to take a stand to consider the effect of gun violence on families. “I’m here to urge all of you to join the movement tonight to save innocent lives. We need to rewrite laws to make it harder for the people to get guns.”

Dobson also took the time to address the athletes in the room that night. “All the athletes in this room, you have a lot of power, people look up to you. I know Zaevion did. I urge you to think tonight about why he died and what you can do to prevent the next innocent young man or woman from being lost as well. If my son were here tonight I knew what I’d say to him, Zaevion, you’re dream and visions are here with us to prove that your act of bravery and boldness revealed to the word the real you – handsome, strong, and with a beautiful spirit you were, and remain, a guardian angel to us in heaven is where you belong. Fly high our Falcon.”

According to ESPN, the award was given to an individual that possessed strength in the face of adversity and willingness to stand up for what he believed in no matter what the cost. The award was presented by Steph Curry.

Check out Zaevion’s mother speech below. 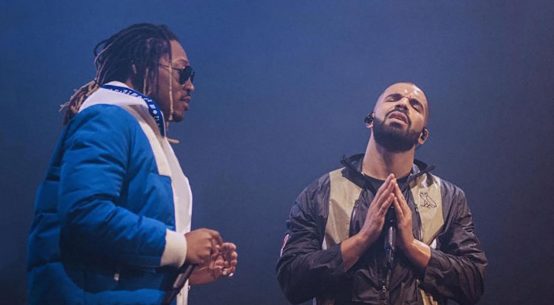 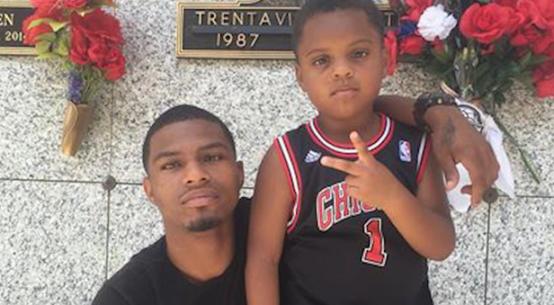