Skip to content
You are here
Home > Featured > Introducing The Newest Girl Group Heating Up ATL: The MAKO Girls! 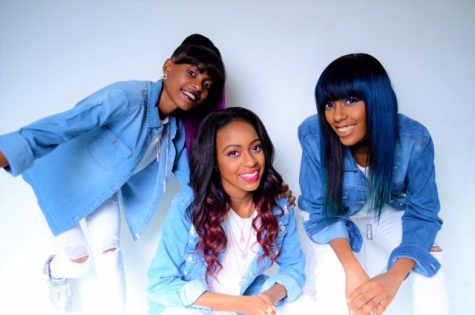 Ladies and Gentlemen, meet the MAKO Girls. The trio is a Pop/R&B group from the hottest city for music right now, Atlanta. However, they’re not just any ordinary girl group collaborating; the trio is three sisters. Mimi, A-Ni, and Kena love to sing, dance, and showcase their rapping skills. The girls have been seen on platforms such as FreddyO, BlackCelebKids.com, and NBC11Alive. The MAKO Girls have also performed in front of crowds for the Sweet Auburn Music Festival, 2016 BET Weekend, and the 2016 Tween Star Awards. With a West Indian background, The MAKO Girls are sure to take their careers to new heights with a new sound and a unique twist to girl groups as they introduce their brand new video “Worldwide.”

Check out their exclusive interview with CeeSoDope below.

CeeSoDope: What are you guys expecting people to know more about the MAKO Girls from the “Worldwide” video?

A-Ni: I hope they see how much work and effort we put into our videos.

Kena: Also, from the song “Worldwide” to let them know that we are global artists. We’re not just in the U.S.; we’re worldwide. I also think to show the leveling up from when we first started from our “Turning Up The Crowd” video to “Worldwide.” It’s such a big difference. So I want them to see the growth from where we started to where we are now.

CeeSoDope: What do you expect people’s reaction to the video will be?

Mimi: That’s what they do all the time, so we’re just ready for them to see it because we went to Florida to shoot some shots. We did some shots in London.  And so we’re excited.

A-Ni: We filmed like the big time artists that go everywhere to shoot their video. That’s what it felt like.

CeeSoDope: Who came up with the concept for the video?

Mimi:  We all worked with our manager, Michael Ochoa, of course, to get the concept together and I think it’s just based off of where we went to London.  And then, because Kena loves the Chinese, Korean, and Japanese culture, we made outfits like that for the music video.

Kena: They used a piece of my sixteenth birthday party costume. 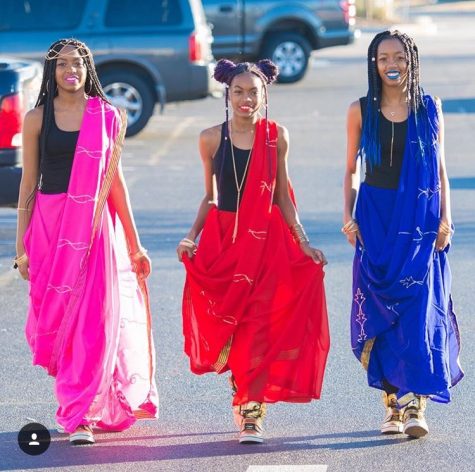 Mimi: She had a kimono, so we took some pieces off of it and put it into our outfits for the video. So that way they could see the different culture in our style as well.

CeeSoDope: You guys started performing in 2012. What made you be like, “Okay, we need to put a group together?”

A-Ni: When we went to the Mindless Behavior meet and greet, and we got their documentary, and they signed it we were like, “Oh my God, we’re big fans!”

Mimi: I think just seeing somebody else’s journey, and us feeling like we could do it as well, is what pushed us to get started.

CeeSoDope: How did the opening performance come about for Mindless Behavior at the Official MB Exclusive Album Release Party?

Mimi: Okay, well first it was so, so exciting because we love them so much and that was one of our dreams to do for them. We came across them because our dad is from Tobago. He works at DBS Sounds. He got us with the managers to get us to be able to perform. I believe he told them about our song, “Turning Up the Crowd” because it has Mindless Behavior’s name in the song, so we kind of figured that would be a bonus for us to get on there too.

A-Ni: It was just a good experience because after they were like, “So, we like that Mindless Behavior part.”

CeeSoDope: Who are the people that are working with the group to help each of you reach the next level in your careers?

Kena: “Momager” and dad – oh our “parentgers” because they’re both.

Mimi:  Our father helps us with social media. He helps to promote a lot of our things, to get it sponsored, so that way people who don’t even follow us can know who we are. And our mom is so hands-on with our website and teaching us how to copyright our music that way we’re set to go the next level.

CeeSoDope: How did you all decide what songs were going on The MAKO Girls Experience E.P.?

Mimi: Also to make sure that they can see a little bit of everything from us, like, they hear us sing, they listen to us rap, so they don’t put us in one category, like “You can only sing.” We do all of it. So we want to make sure that we showcase everything in the E.P.

CeeSoDope: What are you guys’ favorite song on the E.P.?

Mimi: It’s between “Mako Thing” and “Game Time.” “Game Time” is hyped. You know, if you’re in a car, you just want to hype up. You just listen to that song. “Mako Thing” only because the bass, I like it in the song.

Kena: I would say, probably, “Slay” would be my favorite. It was really fun to record, and it sends a message. And the ad libs in it is killing.

CeeSoDope: How do you think the public responded to you guys’ first E.P.?

A-Ni: At first, we were nervous. We were like, “Okay, we hope these songs are really good.”

Mimi: People get surprised when they hear our E.P. They look at us – or they look at the cover – and they see three girls in, you know, the colorful hair. A lot of them first believe that we’re going to be singing about boys or just teeny bopper songs. But then when they hear us rap and stuff, they are so surprised. They are like, “I wasn’t even expecting that.”

CeeSoDope: How have artists such as TLC, Missy Elliot, and Aaliyah inspire the music that you guys make?

A-Ni: Well, For TLC they have a message in their song for each song they do. It always carries a positive message.

Kena: They’re swag. We want to have that type of swag that can be approachable, can also have fun in a good, positive way.

Mimi: I would say Aaliyah from watching her work ethic, and then her music is so chill but still popping. So that’s what made our music sound as it does now.

Kena: And also the longevity of their songs.

CeeSoDope: Are you guys worried that people might compare you to the OMG Girlz? And if so, what sets you apart from them and other groups in Atlanta?

Mimi: Well, I know with the OMG Girlz a lot of people compare us because of the purple, pink and blue hair all the time. I honestly don’t take offense to it because I feel like they were really good. I use to watch them when we started too, so I don’t take it as an offense. But I do see the difference in what they do and what we do.

Kena: Also, because we have a West Indian background and we’re sisters. That’s one thing different from many other girl groups in Atlanta.

CeeSoDope: Is the group interested in signing to a label or has any labels reach out to you all?

Mimi: I’m going to say Atlantic because I believe Kehlani and I know Cardi B is signed to them. And they give them the creative control. I like when they support your dream and not trying to change you. Or Interscope, they’re really good too. They had Mindless Behavior and OMG Girlz. And they were doing a lot of stuff when they started. So, they would be really good to sign with too.

CeeSoDope:  How you guys balance school and a music career?

Kena: I’m in college, so I’m trying to find my little rhythm. I think I’ve picked myself up a little rhythm, but I’m not sure. I’m going to have to work it out, but so far it’s going pretty good.

Mimi: I’m a junior in high school, and we have four classes, but I only take three during the day, and I go home for work study. And work study is pretty much my time for MAKO Girls. So it helps balance out where I can work on both because a lot of my teachers already know what I do. So they support me a lot and give me a little leeway.

A-Ni: A lot of work to me is easy right now. I’m in accelerated classes now. So I still get a lot of work, but I just hurry up and finish. As soon as I get it, I finish it. I do it on the bus because I’m very smart. That way when I get home, I can just work with Mako Girls.

CeeSoDope: Who would you all like to work within the music industry?

Kena: I will say, Eminem, Melanie Martinez, and Halsey. I just heard a few of his songs from his new album, and I love it so far. I love it.

CeeSoDope: What is the purpose of the Annual Carnival Glow Party?

A-Ni: The first one was an introduction for us into the music industry showing that we have a West Indian background. And we had so much love and support from the first one that we kept doing it annually and then it became a teen platform for youth artists to perform on.

Mimi: Yes, and we also have red carpet photos and interviews. Clean artists come out and can showcase their talents. It’s not that many platforms for us teens to be able to perform.

CeeSoDope: What’s next for the MAKO Girls?

Kena: I feel like they can look forward to a new sound a little bit like we’re changing it up. We were younger when we made the E.P., so this is the unique sound with “Worldwide.”

A-Ni: We are making our album this year. And we have the fourth Annual Carnival Glow Party going down April 7, 2018, at the Atrium. So we’re planning to sell out and then continue to start up the tour so that way we can take this Glow Party worldwide.

Mimi: Once the album is done, we’ll be doing videos for whichever songs we feel like would be good having a visual to it. You can look forward to our cosmetics line and maybe different colors for our lip glosses.

Kena: And I think we’re going to add more to our collection, MAKO Girls Collection.

Mimi: It’s going to be a new logo and everything, so we’re ready to change up a little bit.

Be sure to follow the MAKO Girls on social media:

Check out more pics of the MAKO Girls below. 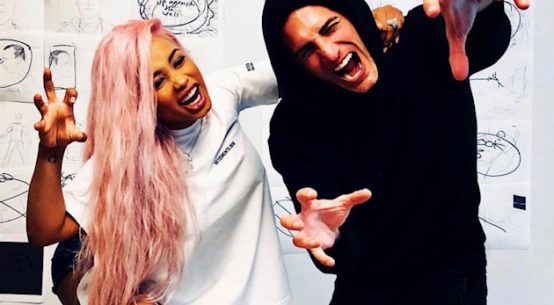 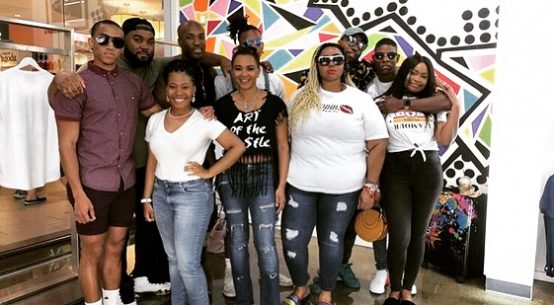