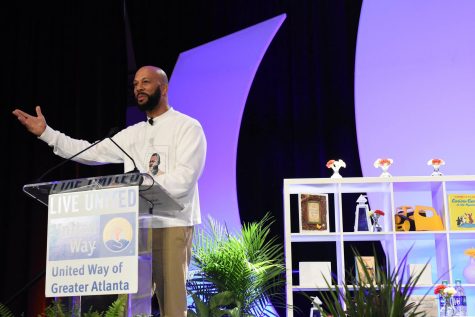 Chicago native Common (born Lonnie Rashid Lynn Jr.) has been rocking the mic since the 90s, and the MC is known for his conscious lyrics on records such as “I Used To Love H.E.R.,” “The Light,” “The 6th Sense”, plus many more. Fans are drawn into the MC’s emphasis of positivity and love displayed through his lyrics.

The Grammy, Emmy, and Oscar award-winning rapper has taken his love for the Black community beyond the studio with his organization Common Ground Foundation. Founded more than ten years ago, CGF has provided job training and resources for inner-city youth in Chicago to increase their opportunities for a prosperous future.

The MC was in Atlanta at the Hyatt Regency on Saturday, March 2 to speak at United Way of Greater Atlanta’s 4th Annual African-American Partnership Leadership Luncheon.

During his speech at the luncheon, he discussed the importance of leadership, spirituality in activism, and love in the Black Community. After the luncheon, I got a chance to interview the hip-hop icon.  As he strolled into the private interview room wearing a white sweatshirt, khaki pants, and black sneakers, his aura was calm as he sat across from me.

Christopher Daniel, Mass Media instructor at Clark Atlanta University, also joined us for the interview in which he started the question and answer interview asking the MC how does he define service.

“I think service is listening to others. Paying attention to others and being willing to sacrifice when it comes to delivering for us,” Common said.

“That’s what the Common Ground Foundation is based on. One of the things I’m most passionate about is giving young people opportunities and giving them access so that they can go out and be the best,” he said. “I think United Way reminds us what we can do with Black youth specifically.”

Inspired and enthused by the organization’s efforts of helping every child reach their full potential, Common has made efforts for the Black community to achieve a level of consciousness with learning more about their culture.

“Black culture wasn’t part of that history that much from what I remember at the public schools that I went to. I think it was a basic approach to academics and because you had teachers that cared, you would get some flashes,” he said

“They paid attention to a lot of the stuff that was needed specifically by students. I learned a little more about Black culture at private school,” he added.

For the lyricist, he believes that education can be holistic and “create whole individuals.”

On other strategies that should be implemented to help Black youth, Common said that the youth needs to be exposed to programs and opportunities that will expand their horizons.

“You have to introduce kids to different things and let them gravitate towards the things that they love,” Common said. “Mental health support would be helpful too in the community. Having the kids be able to go talk to somebody and not a family member that’s not biased towards anything would be helpful too,” he said.

On the topic of hip-hop artists using their voice to pivot themselves in doing humanitarian work, Common said that rappers such as 21 Savage speaking about the importance of financial literacy, Meek Mill with criminal justice reform, and Jay-Z with his work in giving back to the Black community are channeling philanthropic acts.

“When hip-hop artists use their voice, it has a wave to it,” he said.

Common also mentioned that some artists are not going to use their voice to better the community, but when they decide to do so, it must be sincere.

As the interview concluded, Common stated what he is most proud of that CGF has accomplished for Black youth. “I’m most proud that we’ve had a hundred percent graduation rate, meaning all the kids that have been a part of our programs have graduated from high school and went on to college,” Common said.

Be sure to check out the recap video of Common at the 4th Annual United Way Greater Atlanta APP Luncheon below: 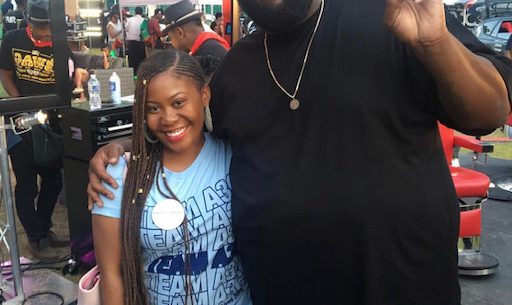 5 Dope Events To Attend For A3C