A FANTASTIC NIGHT FOR BLACK ENTERTAINMENT!

The BET Awards was full of major surprises and astonishing tributes this year. A time where the music industry celebrates black excellence all in one show. A time where black people are appreciated and awarded for their God given talents. Unapologetically Black speeches and performances poured into millions of individuals’ TV screens on June 26, 2016. This year’s BET Awards was even showcased on Nickelodeon. Hosted by Tracee Ellis Ross and Anthony Anderson, the duo kept the crowd entertained with their hilarious skits. They came on stage with old England costumes performing hit singles of 2016 in Hamilton style with a guest appearance from Anthony Hamilton. Their chemistry on stage was high, but this wasn’t no surprise seeing that both Tracee and Anthony play husband and wife on the hit TV show “Black-ish.” The awards were phenomenal from beginning to end. Let’s recap the highlights of the show from some of Hollywood’s famous stars.

Now I have to give up to BET on this one. They were able to keep quiet on Beyoncé being the opening act of the show. The Queen embraced her blackness when she performed her single “Freedom”. Beyoncé’s dancers emerged from a cloud of red smoke. The dancers looked like members of the Black Panther Party; they marched in unison while drums and a speech from Martin Luther King were being played. The dancers made their way onto the stage and lined up side by side. Beyoncé then began singing. The queen had on a black and tan leotard with fringe on the sleeve. The whole audience was on their feet as she sang “Freedom! Freedom! I can’t move. Freedom cut me loose.” All the while the entire audience is standing in awe watching Beyoncé put on one hell of performance. Red lights are flashing, dancers are splashing on the water-filled stage and dancing what resembles an African tribal dance. Just when I thought things couldn’t get any better, there was a sudden pause in her performance, and then none other than Kendrick Lamar emerges from a cloud of white smoke rapping his verse from the song. He joins Beyoncé on stage and the two dance and sing “Freedom” together. Fire blazing in the background as they dance in the water. At the end of their performance, the two hug each other. The crowd gave Beyoncé and Kendrick a standing ovation for their prideful black performance. 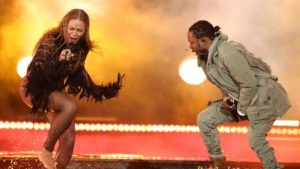 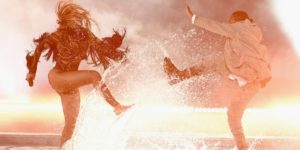 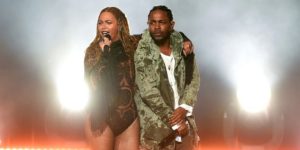 The Prince Tribute top the cake at the BET Awards. Tributes were made to him all throughout the award show by several entertainers. Dave Chappelle announced the tribute. He quoted “The BET Awards is going to celebrate the rich legacy of this remarkable genius that we are all so proud of.” Following his speech, Chappelle introduced Erykah Badu, The Roots’, and Bilal to the stage. All gave a soulful Prince Tribute by performing a medley of his music. Badu’s voice meshed well with the band and the melody of “The Ballad of Dorothy Parker.” Badu was dressed in a white fur jacket, black top, black pants, and hat. Bilal performed “The Beautiful Ones” giving raw emotion into his performance. Bilal humped the floor as if he was making love to it. He hit high notes just as Prince did while performing his music. This was only the beginning of the emotional but wonderful Prince Tribute at the BET Awards. 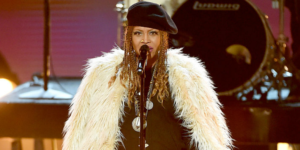 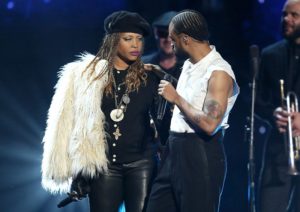 Up next came the legendary Stevie Wonder and Tori Kelly. Tori wore a white blouse and slightly sequined purple leggings. Stevie Wonder wore a black and purple plaid suit. The duo performed “Take Me With U.” Stevie played the keyboard and Tori then picked up a guitar. They blew everyone away with their heartfelt tribute to the one the only Prince Rogers Nelson. Wonder and Kelly’s performance would then be followed by Jennifer Hudson. 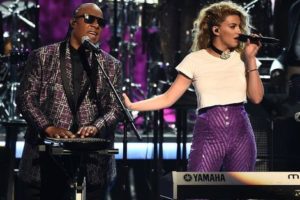 Now everyone knows that Jennifer Hudson can sang not sing but sang [laughs]. Hudson and Bilal hit some notes that night. Jennifer entered the stage with an all-white ensemble that looked similar to an outfit that Prince once wore. 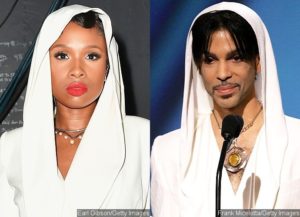 All of sudden the band began playing “Purple Rain.” Jennifer sang that song from her soul. Everyone in the audience was on their feet waving their hand back and forward as she poured her heart in one of Prince’s biggest hit records. Hudson added her flavor to the melody while staying true to the already perfect song. When she got to the second verse, her voice sent chills down my body. The crowd song along as white lights flashed all through the stage. The guitar solo was done by Kirk Douglass from The Roots. It was at this moment that I didn’t think anyone could out do Jennifer’s tribute to Prince. Hudson raised the bar high with her powerhouse vocals. Her performance ended with a picture of Prince on the screen behind her. Hudson nailed it. 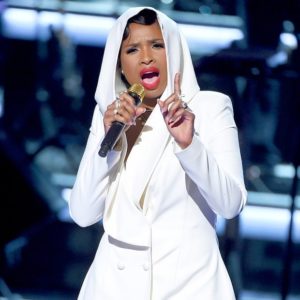 Maxwell (with his fine self) came out on stage with an umbrella and a rain background theme. He sang “Nothing Compares 2 U.” However, he remixed the song. Maxwell remixed the song to address Prince. Letting the world know no one compares to him. He had the exact number of days since Prince went home to eternity in Heaven. 7 hours and 66 days to be exact. “It’s been 7 hours and 66 days since you took your music away.” In the words of Maxwell, “Prince is the truth!” 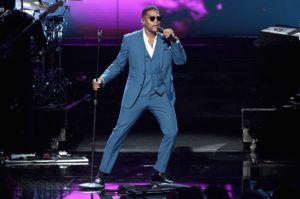 Janelle Monae was next up after Maxwell. This sister gave everyone a run for their money with her dancing. Mimicking Prince signature dance moves and the famous cut-outs in the back of the pants. Monae’s performance was upbeat with performances of “Delirious”, “Kiss”, “Pop Life” and “I Would Die 4 U.” Monae looked angelic in her all white ensemble. She concluded the performance with “I love You Prince.” This wasn’t the end of the upbeat tribute to Prince. The tribute ended with the beautiful, bold, talented Sheila E. 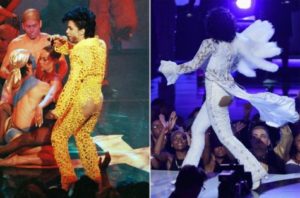 Sheila E. closed out the Prince Tribute with her band and a few of Prince’s backup vocalists. The first song she performed was “Housequake.” This led to the first record her and the late great Prince recorded together, “Erotic City” which was made in 1984. Then came brief verses from “Let’s Work” and “U Got The Look.” After that came the singles “A Love Bizarre” and my personal favorite “The Glamourous Life.” Three songs later, Sheila ended with holding one of Prince’s guitars over her head. Tears streaming down her face as she stood next to Prince ex-wife Mayte Garcia. Flower petals fell from the ceiling. Being the bad ass drummer she is, I knew for a fact Prince was looking down proud of his longtime friend. 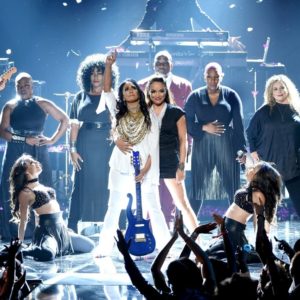 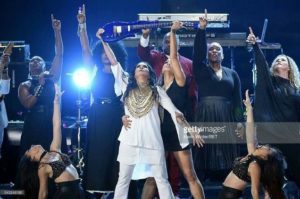 BET also paid homage to another fallen angel Muhammad Ali. Jamie Foxx came on stage to say a couple of words honoring the champ. He talked about his first time meeting Muhammad Ali and being cast as Drew Bundini Brown in the movie Ali, who was Muhammad’s assistant trainer. He quoted Muhammad as the “greatest” and “legend.” Jamie then welcomed Muhammad’s daughter Laila Ali onto the stage. Laila had on a short sleeve white dress with embellishing on the sleeves. Ali shared heartwarming memories of her father while telling the audience what type of man he was, admiring her father’s love for humanity. “My father also once said if people loved each other as much as they love me it’d be a better world,” said Laila. Laila thanked BET and the audience for their love and support. She then walked off stage, and the camera zoomed into the screen behind her which showed a picture of Laila as a baby with her father. 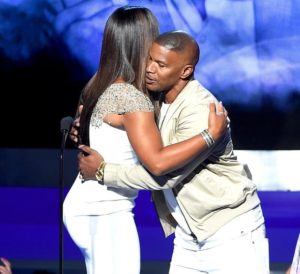 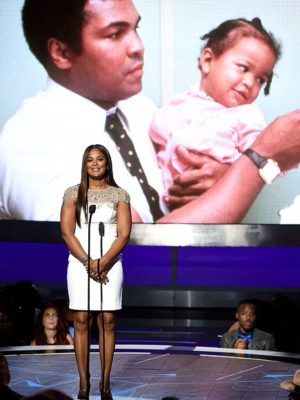 By far the most powerful speech that night at the BET Awards was given by Jesse Williams. Debra Lee, the Chairman and CEO of BET presented the award to Jesse. Before calling him to the stage so he can receive his award, she gave a brief speech on gun violence and tragedies in America. She spoke on issues such as the Orlando shooting. A video was shown of Jesse as several actors spoke on his activism. Williams isn’t just an actor on Grey’s Anatomy but a man who wants better for black people. Jesse thanked his wife, black women, and stated that the Humanitarian Award was for all the organizers, activists, Civil Rights attorneys, etc. Jesse’s speech was powerful, raw, truthful, and the epitome of unapologetically black. He left many viewers in awe including myself. Williams also made a lot of people heated including Stacey Dash and Tomi Lahren’s who believed Jesse speech spewed hate and anger. However, I think many people (conservatives) were bothered by the truth because often the truth can hurt. I can’t put into words how moving his speech was so take a look below.

My last highlight goes to Samuel L. Jackson, who won the Lifetime Achievement Award. Jackson has over 100 movies and is an Alumni of Morehouse College. His Morehouse brother Spike Lee presented him with the award and spoke about working with Jackson. Several movie clips were put together showcasing some of Jackson’s roles in films. In the clip, Samuel talked about how he got his start in theater and how thankful he is to still being doing it today. Samuel kept his speech relatively short giving thanks to those who contributed to his success. 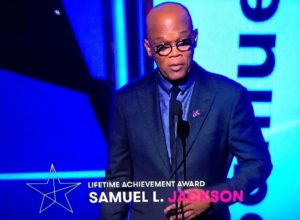 Flashback Friday: Ahmad X “Back In The Day” Music Video!