Skip to content
You are here
Home > Hip-Hop > Kid Cudi Checks Himself Into Rehab For Suicidal Urges & Depression!

Many have wondered why Kid Cudi lashed out at Drake and Kanye West during his Twitter rant a while back. But now it may have been in fact a cry for help.

Kid Cudi, 32, opened up in a Facebook post that he was depressed and having suicidal thoughts. On Oct. 3, he checked himself into a rehab. The name of the rehab has not been made known to the public.

Below is the statement he left on his Facebook. 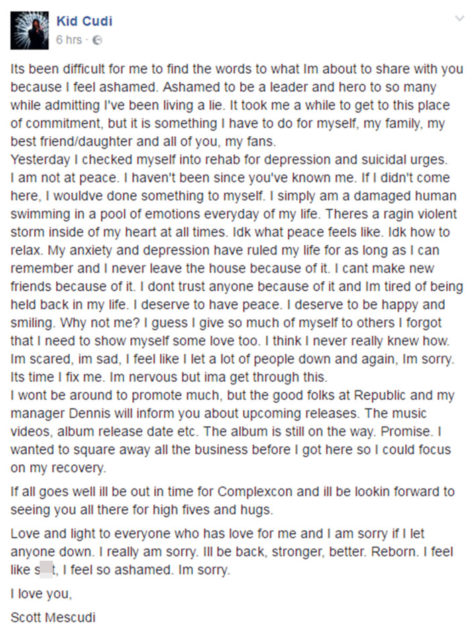 Kanye West did reach out to Kid Cudi and called Cudi “his brother.”

Suicidal thoughts and depression is no joke. If you or someone you know is thinking about committing suicide or suffering from depression, please call the National Suicide Prevention Lifeline. The number is 1-800-273-8255.