Skip to content
You are here
Home > Hip-Hop > Chance The Rapper Does Great Deed By Donating To Chicago Public Schools!

On March 6, Chance The Rapper held a press conference at Westcott Elementary School where he announced that he is donating $1 million to Chicago Public Schools.

Chance gave a speech at the press conference and made it clear that he takes public education seriously and considers Chicago’s children the city’s “most valuable resource.”

Before the conference, Chance met with Illinois Governor Bruce Rauner the prior week. The two discussed public education and other issues affecting Chicago, Illinois.

However, Chance felt as though the meeting with the governor was unsuccessful. He expresses his frustration with Governor Rauner’s “inaction.”

Despite his disappointment, Chance says that will not prevent him from doing everything he can to help.

“If the governor does not act, Chicago Public Schools will be forced to end school 13 days early, which means over 380,000 kids will not have adult supervised activities in June and could possibly be put in harm’s way,” Chance said.

Check out Chance’s speech below and the million dollar check he donated.

.@chancetherapper has got a call set up later to talk with @common about raising funds pic.twitter.com/KAbqaoX8ih 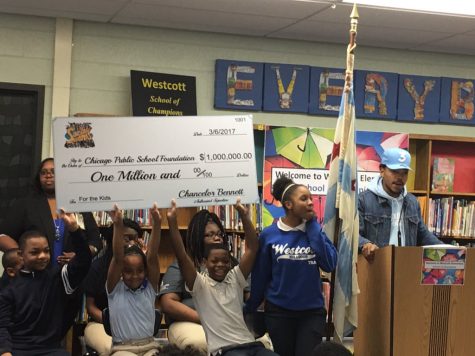