Skip to content
You are here
Home > News > A University of Hartford Freshman Gets Expelled For Harassing Black Roommate!

Brianna Brochu, a University of Hartford freshman, faces a hate crime charge after admitting to doing vile things to her black roommate’s belongings via Instagram. Brochu made the post after her roommate notified her that she was moving out. 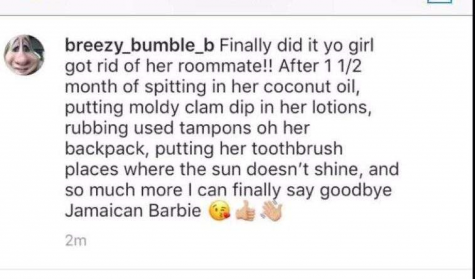 According to NBC Connecticut, Hartford Police are asking courts to charge the 18-year-old  with “intimidation based on bigotry or bias.”

Brochu was arrested Saturday and given misdemeanor charges of third-degree criminal mischief and second-degree breach of peace.

University of Hartford President Greg Woodward gave a statement announcing that Brochu will not be returning to the school.

“Let me be clear: the accused student’s behavior was reprehensible and does not reflect the values of our institution. Let me repeat; racism and hatred will not be tolerated on this campus,” said Woodward.

Brochu’s former roommate, freshman Chennel “Jazzy” Rowe described what she endured while rooming with Brochu in a Facebook live video. Her story has sparked nationwide attention on social media and support from people on Twitter by using the hashtag #justiceforjazzy.

Brochu will appear in Hartford Superior Court on Nov.15, according to The Hartford Courant.