Last weekend, Atlanta was filled with excitement as Sheen Magazine took over the city with the 2018 Kimmie Awards.

April 27-29 was the ultimate beauty celebration weekend for Sheen Magazine. The awards were filled with sessions, concerts, panel discussions, vendor booths, a fashion show, inspirational brunch, VIP private reception, and much more accompanied by some of the hottest celebrities in the industry.

Ceaser from VH1’s Black Ink Crew was one of the many stars at the Kimmie Awards.

On Saturday, April 28, the reality star hosted an exclusive talk discussing artistic entrepreneurship. With more than just a topic of permanent tattoos, Ceaser shared the importance to the audience of creating their lasting mark on the world.

Ceaser mentions how his mother was his idol because she taught him how to hustle. Opportunities arose in front of the art businessman, and he didn’t hesitate to take them.

“When I was given the opportunity to get out the streets and make something better of myself, I took it and ran with it,” said Ceaser.

Even with the willpower to be successful, Ceaser faces doubts from outsiders when it comes to being a Black tattoo artist and owning a tattoo shop. However, he says that Black Ink is about getting back what is owed to people of color.

Being an artist and entrepreneur was a path that he wanted to set for the younger generation coming behind him.

Ceaser says the drive to have his own business was not easy. It took him five years to realize his purpose in entrepreneurship.

“It takes blood, sweat, and tears to be an entrepreneur,” said Ceaser.

Ceaser states that showing his art and business on television breaks the stereotype of what a Black man can achieve in America.

“We don’t have to be a rapper, basketball player, or dress up as a clown to become bigger,” he said.

Ceaser pushed the workshop to be more than just advice on entrepreneurship, but to make it known to the audience that anything is possible.

“Fu*k fear and f*ck anybody that don’t believe in what you want to do,” said Ceaser.

A firm believer in claiming what you believe is yours, Ceaser tells how he first lost the Black Ink shop.

“The shop closed down, and I didn’t tell VH1. I told them I was remodeling the shop. I went across the street to my friend’s apartment and turned it into a tattoo shop. I grind for a whole month and saved $20,000 and repurchased my shop from the landlord.”

Consistent motivation and grind is the key to his success. Ceaser says like Jay-Z, P.Diddy, and 50 Cent, he will sleep when he’s gone.

“I’ll sleep when I’m dead as long as I leave my family with something, a legacy,” he said.

Ceaser encourages those who wish to have their own that they can be an entrepreneur, but it will take time, struggle, and faith to reach success.

“I got here based off of experience, and so can every one of y’all,” Ceaser said. 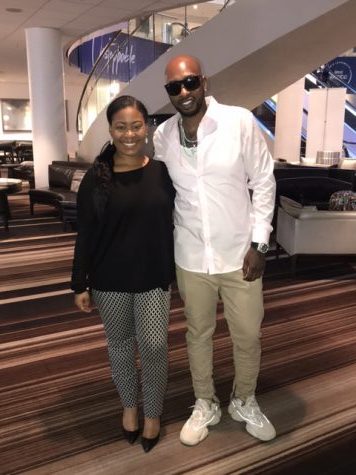