I must say that Katt Williams has always been an outspoken guy in my opinion. He’s never been the type of person to give a politically correct answer, and in today’s society where people can be hypersensitive to other people’s views, I respect him. However, some don’t take too kindly to his outspoken nature.

During an interview with V-103 hosts Wanda Smith and Frank Ski, things got a little out of hand. Williams was there along with fellow comedian Red Grant.

The conversation seemed to be going quite well until the topic of Tiffany Haddish came up. The comedian is known for her hilarious role in Girls Trip and her upcoming role with Kevin Hart in the comedy film, Night School.

Williams gave his thoughts on Haddish and several another comedians in the game, and after that, the interview went downhill.

Williams talked about Haddish’s inability to tell jokes back to back. Williams and Smith then got into a roasting match and well with Williams experience with clowning people on Nick Cannon’s show Wild ‘N Out, it’s safe to say that Smith had no good comebacks for the brutally honest comedian.

I saw a lot of people taking offense to Williams giving his thoughts on Haddish. Williams delivery may not be the best, but he does have a right to his opinion. Many thought Haddish would angrily respond to Williams, but it seems as though she took the high road. The two were even spotted together at the 2018 Emmy’s. 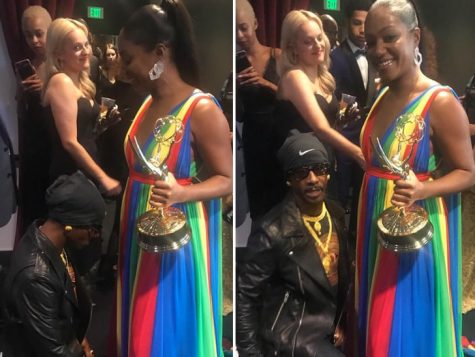 While it looks as though Haddish and Williams made up, Smith’s husband didn’t take too kindly to his wife being roasted live on air.

According to a police report, Williams told Gwinnett County police that Smith’s husband, LaMorris Sellers pointed a gun at him outside the Atlanta Comedy Theater in Norcross.

Sellers stated that his gun fell out when he was chasing Williams into a nearby supermarket, but did not point the gun at him.

Gary Abdo, the owner of the comedy theater, said he was in the V-103 studio when the exchange between Williams and Smith took place and it was super tense.

Smith claims that when Williams saw her on the sidewalk outside of the club, he approached her and said, “I told you f**kin’ with me will make you go viral!”

Due to legal reasons, Smith said she could not go into further detail on air.

In a statement to police, Sellers said that Williams had a verbal altercation with his wife. He said that Williams indicated that he wanted to fight. According to Sellers, he approached Williams and chased him into Food Depot where he left him and returned to the Atlanta Comedy Theater.

When asked if he had a gun on him, he said yes. Sellers stated that as he was chasing Williams, his gun fell from his waistband, and he bent to retrieve it. However, he never pointed it at anyone.

Police are still looking for witnesses who may have seen what took place that night. Willams has chosen not to prosecute.

So where does Hart come into play in all this drama?

Well, the actor and comedian stopped by The Breakfast Club with Haddish to discuss their new film, Night School.

Hart had some choice words for Williams for coming at Haddish sideways and blaming Hollywood.

The topic of which comedian is funnier between Hart and Williams came about after the interview. In my opinion, Williams is funnier than Hart. Hart is a phenomenal businessman and knows how to use every opportunity given to him to open new doors.

However, as I’ve stated before Williams has the right to his opinion and in life, not everyone is going to be a fan of your work, that’s just how the cookie crumbles.

Let’s see what Twitter users have to say about Williams vs. Hart:

But neither one of them is funnier than Katt Williams.

Katt tells full jokes with substance and funny. Kevin and Tiffany have to over-exaggerate themselves for their jokes to hit.

Katt isn’t for Hollywood or TV.

Katt Williams has an Emmy in 2018, he’s a multimillionaire and owns all the rights to his material, what is Kevin Hart talking about? https://t.co/UEtYuVpakM

I like how Kevin Hart put Katt Williams in check but let’s not forget how he roasted the shit outta Wanda. Gnarled fingers? Wig and headphones cane together? ???

Proud of Kev and Tiff! Let your haters be your motivators!

I disagree … Katt Williams tries to hard , Kevin Hart’s funny is natural … even when he not trying to be funny he funny. https://t.co/4gMa9oFJ1R

The studios don’t fuck with Katt Williams because he’s a real one who spoke on the fucked up shit he witnessed in Hollywood. They blackballed him. Not because he “chose drugs”. Kevin Hart is easily controllable and that’s why he’s been getting movies, specials, appearances.

Kevin Hart was so passionate on The Breakfast Club addressing Katt Williams over what he said about Tiffany Haddish that I don’t recall Tiffany sticking up for herself lol. He wasn’t even that passionate when he was apologizing on IG about cheating on his “rib”. Kevin was angry! pic.twitter.com/6vD5kTvqxd

So Kevin hart told Leslie jones that will never make it but he can tell Katt Williams he’s wrong for not helping out women. Also Kevin Hart has never put any woman on. He’s so quick to accuse others but he can’t look at himself. Smh

Katt Williams and Kevin Hart should both sit in chairs on stage and roast each other, and then we can determine a winner lol

I love Kevin Hart and Katt Williams, but if I had too choose who side to be own it would most definitely be Katt Williams lol

Katt Williams the next time he see Kevin Hart: pic.twitter.com/j55XMkQGnc

Grant, who was in the room when Williams and Smith got into it also gave his thoughts on the whole ordeal including Hart’s interview with The Breakfast Club.

What are your thoughts on the entire situation?

Joni Sledge, A Member Of “We Are Family” Sister Sledge, Dies At 60!