I didn’t realize blended families is such a vital topic to the Black community. Most of my peers grew up in a single-parent household. In fact, from what I remember, my siblings and I were the only ones among our group of friends that grew up in a two-parent household with the same biological parents.

While researching, I discovered that, according to the Annie E. Casey Foundation Kids Count Data Center, the majority of African-American youth are raised in single-parent homes. The reason for this is complex but includes out-of-wedlock births and low rates of marriage. Whatever the case may be, co-parenting is a topic that needs to be discussed more often among people of color who live under these circumstances.

Author Mashonda Tifrere is pushing the talk of co-parenting with her new book Blend. With contributions from her co-parents Swizz Beatz (born Kasseem Dean) and his wife, award-winning songstress, and songwriter, Alicia Keys, the book is a guide to creating a happy and healthy blended family.

On Friday, November 30, Tifrere hosted a meet and greet at the Blu’ Bisque to discuss Blend. Alongside her was artist Chris “Classic” Davis and Keep It Classy author Monyetta Shaw, each going into depths on how they overcame their hurt to help their children live in a safe and healthy environment. 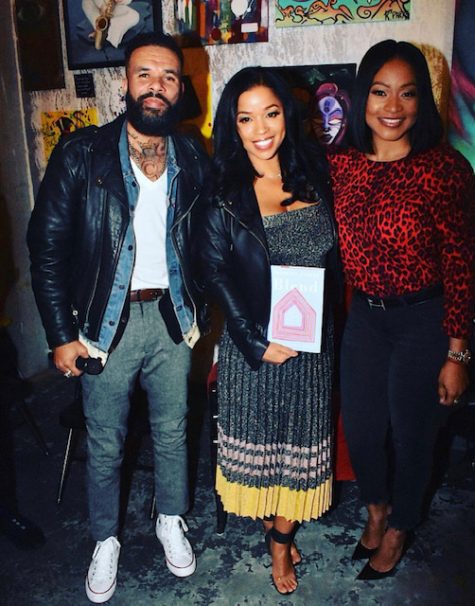 In 2010, Tifrere finalized her divorce from producer Swizz Beatz. The world witnessed Tifrere, Swizz Beatz, and Keys go through ups and downs. Tifrere didn’t shy away from expressing her hurt and anger with Keys who she blamed for “destroying a family.”

After seeing a post from Keys on Twitter stating, “ [In] love, is it better to go [for] the choice that is smart or the choice that has spark?”, Tifrere responded to Keys in a lengthy letter describing her feelings on the situation and how she met Keys through her husband stating:

“AFTER HAVING A GREAT EVENING WITH MY SON AND ENJOYING SOME FUN TWIT CHAT, I DECIDED TO SIGN OFF AND GET SOME WORK DONE. HOWEVER, A FEW HOURS LATER I WAS ADVISED THAT I SHOULD CHECK @ALICIAKEYS TWIT PAGE. I’VE NEVER REACHED OUT TO HER ON TWITTER BEFORE. I FEEL OUR ISSUES ARE A LOT MORE SERIOUS THAN A WEBSITE CONVERSATION. NOT TO MENTION THAT I’VE REACHED OUT TO HER MANY TIMES IN THE BEGINNING OF THIS WHOLE THING, AS ANY WIFE WOULD DO. UNFORTUNATELY, I NEVER SUCCEEDED IN GETTING A RESPONSE. THE 1ST TIME I MET AK (Alicia Keys), MY HUSBAND INTRODUCED US TO EACH OTHER AT AN EVENT. ( I HAVE NO CHOICE BUT TO CALL HIM MY HUSBAND, UNTIL HE IS NOT ANYMORE) IN THE MESSAGES THAT I SENT TO HER (AK), I MADE IT VERY CLEAR THAT ON THE CONTRARY OF WHAT SHE MIGHT BE HEARING, I AM STILL MARRIED TO MY HUSBAND, LIVING WITH HIM, AND JUST HAD A CHILD. IT’S BEEN TWO YEARS AND I STILL HAVE NOT RECEIVED A RESPONSE. WHAT I DO RECEIVE IS CONSTANT DISPLAYS OF SELFISHNESS AND DISCONCERN TO ME AND MY SON.

I WAS A FAN OF AK’S LAST ALBUM, WE WERE BOTH SIGNED TO J RECORDS, AND I ALWAYS CHECKED UP ON HER PROJECTS. I SANG HER SONGS AND ADMIRED HER FOR CREATING “SUPERWOMAN” AND “KARMA.” I WOULD NEVER DENY HER HER TALENT. I BELIEVED IN HER UNTIL I FOUND OUT SHE WAS POSSIBLY SLEEPING WITH MY HUSBAND. THE AFFAIR WAS DENIED BY BOTH, UNTIL IT WAS FINALLY ADMITTED MONTHS LATER.

ALREADY I CAN HEAR SOME OF YOU SAYING ‘WHY ARE U BLAMING HER, YOU CAN’T MAKE SOMEONE LEAVE THEIR WIFE; YOU CANT BREAK SOMETHING THAT’S BROKEN’. WELL, MY MARRIAGE WAS NOT BROKE. AS FAR AS I KNEW, WE WERE CELEBRATING OUR SON’S BIRTH AND GETTING READY TO CELEBRATE OUR 5 YEAR WEDDING ANNIVERSARY. CALL IT BLIND LOVE, WHATEVER. I CALL IT BEING A DEVOTED WIFE.. AS FAR AS ME BLAMING HER AND NOT BLAMING HIM, THAT’S FALSE. ME AND MY HUSBAND HAVE WORKED OUT OUR DIFFERENCES. WE ARE IN A GOOD PLACE AS PEOPLE AND AS PARENTS. I ACCEPT HIS CHOICES AND I AM COMFORTABLE ENOUGH WITH MYSELF TO MOVE ON. I AM SO VERY BLESSED IN MANY WAYS.

MY CONCERN WITH AK IS NO LONGER THE FACT THAT SHE ASSISTED IN DESTROYING A FAMILY BUT THAT SHE HAS THE AUDACITY TO MAKE THESE SELFISH COMMENTS ABOUT LOVE AND WANTING TO BE WITH SOMEONE EVEN AFTER KNOWING THEIR SITUATION. ‘HOW IS THIS THE SAME SUPERWOMAN THAT I SANG OUT LOUD WITH IN MY TRUCK?’, I ASK MYSELF SOMETIMES.
IF YOU ARE READING THIS, ALICIA, LET ME START BY SAYING, YOU KNOW WHAT YOU DID. YOU KNOW THE ROLE YOU PLAYED AND YOU KNOW HOW YOU CONTRIBUTED TO THE ENDING OF MY MARRIAGE. YOU KNOW THAT I ASKED YOU TO STEP BACK AND LET ME HANDLE MY FAMILY ISSUES. ISSUES THAT YOU HELPED TO CREATE.

I’M NOT SAYING EVERYTHING WAS PERFECT ALL THE TIME BUT NO RELATIONSHIP IS PERFECT. WE MADE A VOW TO GOD AND I BELIEVE YOU SHOULD HAVE RESPECTED THAT, AS A WOMAN. I KNOW YOU (DON’T) OWE ME OR MY SON NOTHING BUT I JUST WISH YOU WOULD’VE HANDLED THINGS MORE CAREFULLY. I’M NOT JUDGING YOU, I PUT YOU AND THE WHOLE SITUATION IN THE HANDS OF GOD, THE HIGHER POWER. JUST KNOW THAT AS A WOMAN, I EXPECTED SO MUCH MORE FROM YOU. I NEVER HAD INTENTIONS ON REACHING OUT TO YOU THIS WAY BUT AFTER READING YOUR TWITS TONIGHT, AND THE CONSTANT DISREGARD, YOU LEFT ME NO CHOICE. I FEEL THAT AFTER 1 AND A HALF YEARS OF YOU HIDING THIS AFFAIR AND ACTING LIKE IT DOESN’T EXIST, THAT NOW IS THE TIME TO CONFRONT IT, SINCE YOU TALK SO OPENLY ABOUT IT NOW.

THIS IS NOT A PUBLICITY STUNT, I DON’T HAVE A RECORD COMING OUT. I JUST NEED TO CLOSE THIS CHAPTER IN MY LIFE AND THAT MEANS CONFRONTING OUR ISSUES. THERE IS A SMALL CHILD INVOLVED. HIS DAD LOVES HIM TO DEATH AND HE WANTS TO SPEND MORE TIME WITH HIM BUT HE’S AFRAID BECAUSE HE KNOWS WE (Tifere and AK) DON’T HAVE A RELATIONSHIP. THIS IS MY MAIN CONCERN. MY SON NEEDS HIS DAD AND I NEED TO BE COMFORTABLE WITH YOU. FOR HIM!

I KNOW MANY WILL SEE MY POINT AND MANY WILL NOT BE ABLE TO LOOK INTO WHAT’S REAL BECAUSE THEY ONLY WANT TO SEE ALICIA KEYS THE CELEBRITY, NOT THE HUMAN. THIS IS NOT FOR THE ‘PEOPLE’. THIS IS FOR YOU. LIKE I SAID, I WAS LEFT NO CHOICE BUT TO REACH OUT TO YOU THIS WAY. BY NOW, I’M SURE YOU WANT TO FIND A BALANCE IN THIS AS WELL.

I READ YOUR TWEETS TONIGHT AND I FELT THEY WERE VERY INSENSITIVE. YOU HAVE NO IDEA HOW MUCH PAIN I WAS CAUSED BECAUSE OF THIS AFFAIR. ITS BAFFLING TO ME THAT YOU DON’T UNDERSTAND WHAT I MIGHT HAVE GONE THROUGH WITH THIS SITUATION. I DON’T CONSIDER MYSELF A VICTIM ANYMORE. I’VE LEARNED A LOT FROM THIS! I JUST ASK YOU TO TRY AND BE A BIT MORE REALISTIC AND DELICATE TO THE SITUATION. AT LEAST UNTIL MY DIVORCE IS FINAL. I FELT ME ATTENDING THE PARTY WOULD HAVE BEEN A STARTING POINT FOR US SINCE YOU SHOOK MY HAND AFTER I OFFERED IT, BUT I SUPPOSE I WAS WRONG.

IF IT’S SO THAT YOU AND MY HUSBAND ARE MEANT TO BE TOGETHER, THEN GOD BLESS YOU BOTH AND I HOPE YOU NEVER HAVE TO DEAL WITH WHAT I DID. I WOULD NOT WISH IT ON MY WORST ENEMY. IF YOU TWO BEING TOGETHER FOREVER IS THE CASE, IT’S MORE OF A REASON FOR US TO GET ALONG, BECAUSE I’M NOT GOING ANYWHERE. THERE’S A CHILD TO BE RAISED.

TO ANSWER YOUR TWEET, CHOOSE SMART OVER SPARK. SPARKS BURN EVERYONE, BE SMART! IT’S SIMPLE, ACTUALLY, JUST THINK OF THE SHOE BEING ON THE OTHER FOOT.
STAY BLESSED AND LETS WORK THIS THING OUT WITH RESPECT AND DIGNITY.”

As you can see from the letter, Tifrere had some strong feelings toward her situation, and I must admit, rightfully so. Fast forward, who would’ve thought that all parties could come to a common ground and blend their families?

Tifrere could have gone down a route of releasing a tell-all book out of hurt and anger, but instead, she took the high road and published a book that everyone who is co-parenting can learn from.

Tifrere’s book is a collection of journals describing her journey in overcoming her past hurt, creating a better environment for her son Kasseem Dean, Jr., and allowing Keys and her ex-husband to give their side of the story. This gives Blend a personal and inspiring guide to co-parents nationwide.

Tifrere stated after her divorce; she had to figure out how to co-parent and accept her new life.

The road to building her relationships was a turbulent one. Tifrere admitted that her inspiration from the book came for her need to heal, but most importantly, her son.

“My son is my number one priority, and I needed to be healed and (be) the best version of myself for him,” Tifrere said.

During the meet and greet, a series of questions were asked from the audience such as how to deal with discipline, what happens when the child or children are disrespectful to the co-parent, a mother feeding bitter lies to their children about the co-parent out of hurt and the right time to introduce your significant other to your child.

Davis mentions that he had to build a relationship with his son’s stepfather. The key to a healthy blended family is “communication.”

Shaw also had to learn to better communicate with her ex, Ne-Yo, and his wife, Crystal Renay. Her book Keep It Classy is self-explanatory on how she had to deal with her hurt on her own time while being a mother to her beautiful children, Mason & Madilyn Smith.

When it comes to introducing your significant other to your child, Shaw, Tifrere, and Davis all agreed that you have to go with your instinct if you think the relationship is getting serious and potentially can lead to marriage.

On the topic of disrespect, more-so from the child to the co-parent, Tifrere recalls a time where her son was upset that Keys and his father wanted him to go to bed at an earlier time than what he was used to. Tifrere had to tell her son that there are different rules when he’s at his dad’s house.

Tifrere also had to let go of her ego when Keys requested that Tifrere’s son called her “Umi,” meaning mother in Arabic.

What I learned throughout the entire meet and greet is that Tifrere and Shaw were in the spotlight when their relationships ended. Even though they were dating celebrities, they were still human beings with feelings. I was brought to tears as they shared their honest testimonies of anger, hurt, and then healing to be a better person for their families.

After Tifrere discussed her book, it opened my eyes to her situation; while there were wrongdoings, three adults were able to come together to raise a child. It took forgiveness, love, patience, and communication for Blend to be created.

For those struggling, Blend provides advice from family therapists, parenting experts, and experience to create a healthier and happier environment for all parties, but especially the children.

I applaud Davis, Shaw, and Tifrere for sharing their truth. It indeed takes a village to raise a child.