BET’s new hit television series “Hustle In Brooklyn” highlighted the social and professional lives of some of the hardest working hustlers in Brooklyn. The cast ranged from hip-hop artists, event planners, entrepreneurs, publicists, and more. Celebrity publicist, Alicia Gooding were among the cast members, and she also helped cast personalities for the show. Her personality, however, pushed her from behind the scenes to in front of the camera.

The owner of her marketing and public relations company C.O.D.E. (Curators of Defining Experiences), Gooding showed the world the definition of a hard-working woman in entertainment. Gooding works with a range of celebrities from reality star Erica Mena, to rapper and television personality Safaree Samuels, Busta Rhymes, and many more.
Check out the exclusive interview with the entrepreneur and publicist as she discusses working with celebrity clients, how she balanced reality television and business, and much more:

2) How did your gig on “Hustle In Brooklyn” come about?

The casting director, Byata Dikker, initially reached out to me about my agency company helping cast the show, which we did. We were involved with four weeks of the casting process. After about a week she was like, ‘we have something great, but there’s still something missing. Will you get on Skype and talk?’ I got on Skype with the production company and the very next day; she called to let me know that she wants me to be on the show.

3) What were some pros and cons of doing reality television?

One con is that I didn’t realize how much power and control you have behind the scenes. It’s hard for me being in a situation where someone else is in control.

Another con is set times. With reality TV, you would assume that since you’re yourself that whatever you shoot, it’s going to be one take. So we shoot a whole scene, and the cameramen are like, ‘great guys, now we’re going to shoot the wide shots.’ The wides are when they get a wider angle, but it also means that scene you just shot, you shoot that again. They will give you talking points because you forget what the hell you just talked about.

A pro is I enjoy raiding the snack container of the production crew. Occasionally, I’ll have a Red Bull. Red Bulls are expensive. They’re like $4 a piece in New York. You have to enjoy those little things when it happens.

4) How did you get into public relations?

I fell into this business, honestly. It was God’s plan. I was really into customer service, dealing with people, and working with people. So when I started my company, I wanted us to be the number one marketing company in New York.

The first event we did, we got hired to produce an event for BLEU magazine. The event was for their cover of Nick Cannon. What we presented to them was an event called “A Few Good Men.” We presented sponsors like Tesla, Nivea, and Lacoste as brand partners. The event had a buzzing, and people started calling our phones asking us if we could represent them.

We signed our first official client Memorial Day in 2014. Reality personality Erica Mena called my former best friend at the time and said to her ‘that girl Alicia; I want her to rep me.’ The first thing Erica wanted was backstage passes to Summer Jam. Summer Jam was six days later on a Sunday, and I got her those passes; we got six passes. That’s where it all started, and she connected me with A Boogie wit da Hoodie.

5) What was the transition like from brand marketing to PR?

It was a melting pot. Everything came together. However, even though PR and marketing go hand in hand, they’re two different lanes and being an entrepreneur, you’re only as good as the last thing that you put out.

6) What are some challenges you face working in a male-dominated business?

My biggest challenge is the fact that there are not enough women. I think it’s frustrating with men sometimes because it becomes a dick measuring contest, it’s just that my dick is invisible. It’s honestly getting other women to see that we’re each other’s allies. That’s my biggest thing to live with it. We are our biggest enemy.

7) What’s a typical day like for you as a celebrity publicist?

When I’m in New York my day starts super early. I tell everyone, every day is different. It’s an on-call job, which means that you got to be ready at any time. If your client decides to smack somebody in the front row of a Drake concert at one in the morning and calls you about it at 1:02 a.m., you got to call every single publication on the west coast to make sure that story doesn’t run. Every day is different.

8) How did you balance the show and dealing with clients?

We have a team in New York. I also have a creative team and a junior publicist that works with me. So from the minute, we find the client, we know where we want to go with them. I have pitch angles in my proposals. So when someone pays me, I don’t want to feel like I’m a bank spending all their money and you’re not getting anything in return. My team helps me a lot.

What I do like most about it is the perks. I love the fact that I get so much free shit. I always tell people my work life looks glamorous, but my personal life sucks. But all that to say the glamorous looks comes from the perks. 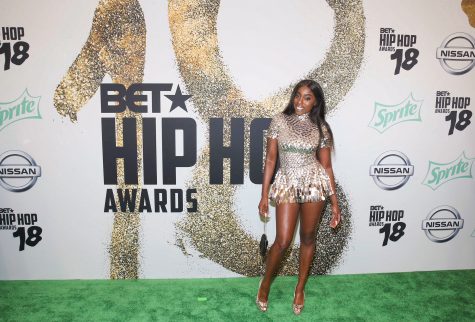 10) Since the season finale of the show, what is it that you think people learned about you from seeing you on “Hustle In Brooklyn?”

I’m not a traditional girl that you see on reality TV. It excites me to know that people saw a working woman. I don’t have to pick up a microphone and sing, become a rapper, or oversexualize myself to get the job done. I don’t have anything against people that do that. I wouldn’t have a career if it weren’t for those people.

11) What special projects are you working on with Roc Nation & Busta Rhymes?

So when ROC Nation has new artists that they sign, they’ll have me take them around introducing them to key players in the industry. They always hire me to be the voice of the young people. They want the right press, mixed with the right influencers for events as well.

For Busta Rhymes, Shaheem Reid is who originally introduced us. He’s a legendary hip-hop journalist. Three weeks after I met Busta Rhymes, I walked Ski Mask the Slump God into his studio. Ski shared with me that Busta Rhymes was the reason why he started rapping. I was like ‘do you want to meet Busta Rhymes?’ He was like, ‘hell yes.’ He meets him, and they start hitting it off. The very next day Busta calls me, and he starts asking me for advice and consulting. So all we do with Busta is social media consulting, A&R consulting, but from the young people’s standpoint.

12) Which celebrity would you want to be a publicist for in the future?

Diddy! We’re both Scorpios, and he’s so amazing. Diddy makes sure he gets people on his team that are within the culture. So even if he doesn’t know, he can find out exactly where he needs to be because he has the right people around him. Also, his energy is unmatched.